Register as a user

Basic Information for the Investor

Housers is neither a credit institution nor an investment services company. It is not a member of any investment guarantee fund or deposit guarantee fund. Therefore, the invested capital is not covered by these funds.

Housers is neither a credit institution nor an investment services company nor does it provide financial advice, so nothing on this website should be interpreted as such. The information on this page is for general information purposes only and does not constitute specific advice.

The equity financing projects published on the website are not subject to authorization or supervision by the Comisión Nacional del Mercado de Valores (CNMV) or by the Comissão do Mercado de Valores Mobiliários (CMVM) or by the Bank of Spain or Portugal or by any other regulator, national or foreign. The information provided by the developer has not been reviewed by any of these bodies and does not constitute a prospectus approved by them.

The developer of the project is responsible to the investors for the information provided to the crowdfunding platform for publication within the project on the website.

The investment through Housers must be made as part of a diversified portfolio. The investment in Housers is intended for people with sufficient knowledge to understand the risks inherent in each project.

In the projects that are published on the platform, Housers offers all Users an approximate Scoring that allows Users to estimate the potential risk of each project before investing. The Scoring has an approximate purpose and therefore, the User should know that he/she should not base his/her investment on the Scoring that is done on the projects. Housers does not offer any guarantee regarding the veracity of the content of the Scoring, the accuracy, timeliness, or liability of the information published in the Scoring, regardless of who performs the Scoring.

There is a risk of illiquidity in recovering the investment, i.e., if an investor wants to liquidate its investment before the scheduled term, this liquidation may be delayed. Generally, the financing projects published in Housers are medium or long term, and the investments in them cannot be considered liquid.

The developer has limited own resources so that its responsibility in the project is limited to those resources, being able to accumulate more than one project on the platform entails an additional risk of concentration.

In addition, when the project finance is instrumented through the emission of values, the following risks exist:

Housers is a crowdfunding platform whose activity consists of putting in contact, in a professional manner and through the website www.housers.com, a plurality of individuals or legal entities (investors) that offer funding in exchange for a monetary return with individuals or legal entities that request funding in their name (developers) to allocate it to a crowdfunding project.

The investment in the projects published by Housers will be implemented either through the application for loans, fixed or participative or through the creation and assumption of shares of limited liability companies (Equity).

The investment projects published in Housers may be based on different types of projects, either fixed-rate projects, participatory projects, or equity projects.

Housers Real Estate projects will consist of financing to a developer for the acquisition of real estate assets or their possible exploitation in lease and sale in the market after a certain period (hereinafter, "the Opportunity" or "the Opportunities"). Often, the financing granted will also be used to carry out the integral reform of the real estate assets acquired, thus increasing their value and profitability.

Housers Green projects will consist of financing to a developer for the development and operation of a project related to renewable energies (hereinafter, "the Opportunity" or "the Opportunities").

The projects selected by Housers pass, firstly, a screening procedure within the different departments of Housers that filter those projects that comply with the legislation and whose potential make them susceptible to be financed by investors. Subsequently, an exhaustive review is carried out in which Housers risk analysis team verifies the situation of the developer, if applicable, the situation of the real estate asset from a legal and technical point of view and finally they analyse the overall financial data of the project.

The developer is the one who contacts Housers directly by different means and sends electronically all the required information so that a detailed analysis of the proposal can be carried out to estimate its viability and proceed with its publication.

Housers rigorously analyses the investment projects that it receives from the developers based on homogeneous and non-discriminatory criteria, to verify the viability of the same and to protect the interests of the investors. To this end, before the publication of the projects, it carries out the following actions:

Housers protects the investors' funds by keeping their capital in a segregated and secure account in an external and independent payment entity, regulated and authorized by the Bank of Spain, which is responsible for managing all fund movements.

Types of opportunities and calculation of their profitability

Scoring is defined as the objective or impartial analysis of the main parameters of a company, a financial product or an investment project, the purpose of which is to obtain an evaluation. The scoring of opportunities is carried out through a two-pronged analysis:

What was the scoring at Housers based on at that time?

The system used by Housers at that time was based on a series of variables that offered a higher or lower score depending on the risk of the opportunity:

After this analysis, the projects were classified according to this different alphabetical scoring system, which is not comparable to the new scoring system implemented in May 2019 and carried out by external companies. 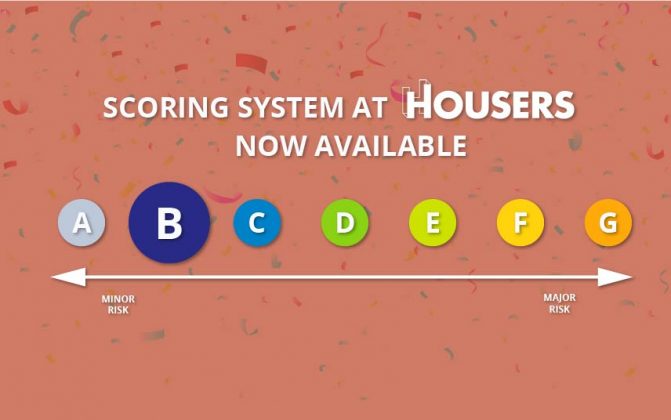 In the projects that are published on the platform, Housers offers all Users an approximate Scoring that allows Users to estimate the possible risk of each project before investing. The Scoring has an approximate purpose and therefore, the User should know that he/she should not base his/her investment on the Scoring that is performed on the projects. Housers does not offer any guarantee regarding the veracity of the content of the Scoring, the accuracy, timeliness, or liability of the information published in the Scoring, regardless of who performs the Scoring.

The fees applicable by Housers to investors and developers can be consulted in our Maximum Fees and Chargeable Expenses Brochure.

To avoid conflicts of interest, Housers has approved an Internal Code of Conduct whose content you can consult here: Internal Rules of Conduct.

Unavailability of the services provided

Given that the web platform enabled by Housers is based on software systems, hardware, and communication through the Internet, Housers does not guarantee continuous or uninterrupted access and use of the Housers website. Consequently, the system may eventually be unavailable due to acts of nature or force majeure, as well as technical difficulties or Internet failures, or any other circumstance beyond Housers control. In such cases:

The web platform is hosted by a specialized provider of Cloud services which allows high availability and security of the service.

1. Measures to minimise the risk of fraud

Considering the type of business and investments that are made with its services, the possibility of fraud can occur both internally and externally to Housers for which it has implemented the following procedures and measures:

Cessation of activity of Housers

As a measure against the hypothetical cessation of the provision of services, Housers has taken out a policy with the company AIG Europe S.A., Entity registered in the Mercantile Registry of Madrid, Volume 37770, Folio 48, Page M- 672859, Inscription 1 Key E0226 of the Directorate General of Insurance and Pension Funds, which provides for the provision of services in case of cessation of activity as consideration for the payment of the additional Premium.

The Services referred to in the preceding paragraph shall be limited to the following:

In short, through the policy Housers is given continuity to continue managing payments, to later continue with the option of passing the loans to a third platform authorised by CNMV, so that with the insurance coverage contracted the transition to another platform will be managed. If no other interesting platform is found, the option of putting developers and investors in direct contact with each other would be maintained.

This ensures continuity of payments until the end of the project.

Regarding the projects published on the platform and in the event of termination of activity, the projects will be treated neutrally as one of the projects financed and not closed, so that the applies to them both for coverage by the contracted policy and regarding the Payment Service Provider.

If Housers decides, for any reason, to cease its activity, it will notify in writing to investors and promoters three (3) months in advance, proposing if possible, a substitute participatory financing platform that would succeed Housers in the rights and obligations assumed against them, and indicating the procedure to proceed to an orderly transition from one platform to another. If Housers by its own decision or force majeure does not activate this mechanism, investors and promoters would have to relate directly, that is, without the intermediation of a platform, without prejudice to their right to claim the damages that, where appropriate, would correspond to them.

If a User decides to terminate the contractual relationship with Housers, and the User has signed one or more Contracts with one or more Developers through the Web about different Opportunities and these are still in force, Housers will block the Users account until the completion of all those projects that are in force.

The following are causes for termination of the contractual relationship between Housers and the User:

Resolved the contractual relationship between Housers and the User will produce the following effects:

The Investor may request Housers, at any time, to voluntarily unsubscribe from the web platform. In this case, he/she must notify Housers through the Web and Housers will proceed to unsubscribe within a maximum period of ninety (90) days from the moment in which all the projects in which he/she has invested are completed. If you have invested in any project, and this has not been completed, Housers will block your account until the completion of all those projects that are in force.

The consequences of termination provided in the previous section will be applicable in the case of voluntary cancellation by the User.

If the Investor has entered one or more Contracts with a Developer through the Website about different Opportunities, these may not be terminated except as provided for in these Contracts.